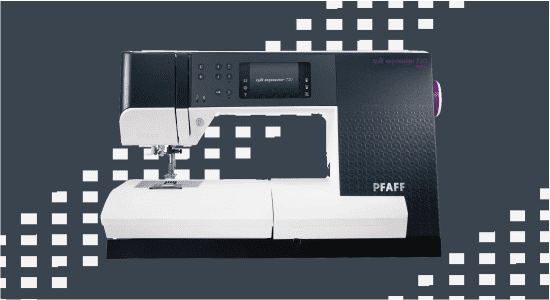 Are Pfaff Sewing Machines manufactured taking quality into consideration? Well, we can find the answer to this if we can trace where are they actually made.

The simple answer to the question “Where are Pfaff Sewing Machines made?” is China. This is due to the brand’s affiliation with SVP Worldwide, which will be discussed more below. You’ll also learn more information about this brand and if it’s worthwhile to get a sewing machine from them.

In 1862, Georg Michael Pfaff, an equipment manufacturer, established PFAFF in Kaiserslautern, Germany. The first sewing machine that Pfaff built was a hand-cranked model created specifically for stitching leather in the shoemaking industry.

Georg Michael Pfaff started selling sewing machines in London in 1885. The PFAFF plant underwent a major expansion and upgrade. After the death of the company’s founder in 1893, the second son, Georg Pfaff, took over the administration of the firm and continued its rapid growth. Because Jacob Pfaff, the founder’s eldest son, passed away in 1889, the company was left without a surviving heir. So when his brother Georg passed away in 1917, his daughter Lina Pfaff took over the business and successfully expanded it internationally until 1926. When she retired at the age of seventy-two, her nephew Karl Pfaff took control of the company.

In 1910, they produced their one-millionth machine. However, in 1999, Pfaff was acquired by Husqvarna Viking and after that they expanded its production line.

Where are Pfaff Sewing Machines Made Now in 2022?

Pfaff was founded in 1862 in Germany. The VSM Group amalgamated with SVP Worldwide, which includes Singer, Viking, and Pfaff, in 2006. The bulk of their equipment manufacturers are based in Shanghai, China.

Are Pfaff sewing machines made in China?

Yes, Pfaff sewing machines are made in China. Since they were a member of SVP Worldwide in 2006, they began importing them into China in 2007. On top of that, their sewing machine production is based in Shanghai.

In China, they outsource their manufacture of sewing machines, quilting machines, and sergers. The reason to shift their manufacturing unit to china from North America and Australia is that the labor rates are higher. However, they have a factory in Tennessee and one in Melbourne that makes the parts for their mid-range and high-end products.

Are Pfaff machines manufactured in Germany?

Pfaff sewing machines were initially manufactured in Germany in 1872, 10 years after Georg Michael Pfaff invented the first sewing machine. In 1862, he was also in charge of the GM factory Pfaff. Pfaff also established a facility in Kaiserslautern, Germany, to aid output.

Pfaff was able to produce five million sewing machines by 1950. Following that, Kohlberg and Company, which already owned Singer, purchased Husqvarna Viking and Pfaff. This resulted in the formation of SVP Worldwide. Nonetheless, Pfaff guarantees that every product will be dependable, meaning that it will work properly and be of the same quality as when it was originally sold.

Are Pfaff machines manufactured in Brazil?

Are Pfaff sewing machines made in Italy?

No, Pfaff sewing machines are not made in Italy. The headquarters of the corporation is located in Nashville, Tennessee. However, SVP Worldwide has its overseas sales department offices located in Italy.

Are Pfaff sewing machines made in the USA?

Are Sewing Machines Made by Pfaff Dependable?

Pfaff’s sewing machines are dependable. They’re made using the best components and technologies to ensure that they’re durable, reliable, and accurate. They also have multiple warranty options with a variety of coverage periods.

Pfaff has sewing machines ranging from basic sewing machines to advance sewing machines. Some advanced sewing machines come with more advanced functions such as Bobbin Winding or Automatic Close Positioner. For example, the Singer VX7100 sewing machine has 380 stitches in professional fabric modes like Up & Down Stitch, Wide Stitch, and Stretch Modes, plus a fully automatic top-loading bobbin system for quick and easy access to bobbins and threaders.

When was the first Pfaff Sewing Machine built?

The first sewing machine was made by Georg Michael Pfaff in 1862. The first model, which consisted of a lever, needle, cotton bolt, and eyelet, was made before the invention of electricity. It could sew 12 stitches per minute. By 1867, he opened a plant where he produced 7500 sewing machines per month. By 1888, he had 10000 machines being used daily in 500 factories to make clothes for soldiers.

When learning how to buy a sewing machine, you want to get one from reputable manufacturers. And, given Pfaff’s 150-year history, it’s logical to consider it a solid brand for individuals looking to purchase a sewing machine. Furthermore, Pfaff had successfully created a reputation for making long-lasting and high-quality units from its inception in 1862 and is still a household favorite today.

What are the Key Features of Pfaff Sewing Machines?

Let us look at some of the features that are exclusive to Pfaff sewing machines:

What Other Benefits Do Pfaff Sewing Machines Provide?

Pfaff does not want its customers to turn away from its machines just because they are expensive. They want you to be able to afford them and experience the satisfaction of purchasing a quality machine and maintaining it correctly.

For those who are new to sewing, Pfaff has a special user’s guide that is affordable. It is called “Pfaff Sewing Guides” and can help you learn the basics of sewing by yourself.

There are also many accessories sold separately by Pfaff that can extend the life of your machines, such as Needle Sets, Bobbin Cases, and many more.

So if you’re planning on owning a Pfaff sewing machine, now you know what to look for in buying one. And remember, there are many different models available for sale depending on your specific needs for your household or business-related activities or hobbies.

How Do You Maintain a Pfaff Sewing Machine?

Maintaining your sewing machine can be a time-consuming activity, but it is completely necessary. From regular oiling to replacing the needles and bobbin, Pfaff recommends that you clean your Pfaff sewing machine when needed. Some of the parts of the machine that need special care include the needle plate, presser foot, and even your bobbin case.

Are Pfaff Sewing Machines easy to use?

Pfaff sewing machines are quite easy to use, especially when you take the time to familiarize yourself with your machine’s features. You should read the manual carefully and practice on some scrap material first before actually using your machine to sew something important. When it comes to ease of use, Pfaff sewing machines are on par with other major brands like Singer or Brother.

If you choose Pfaff for your first sewing machine, or if you’re looking for a high-end model for your business, you’ll be satisfied with the features and performance in virtually any of its units. In fact, many professional seamstresses claim that these models have outperformed other brands they have used in the past.

Is there Any Value in Vintage or Old Pfaff Sewing Machines?

FAQ about Where are Pfaff Sewing Machines Made?

Where was my Pfaff Sewing Machine made?

Pfaff factory was in Kaiserslautern Germany in its early production. And, if you have a vintage Pfaff sewing machine then it might have traces in the German factory otherwise new models are being manufactured under SVP Worldwide in China.

How much does a Pfaff embroidery machine cost?

Pfaff sewing machines are of the greatest European quality, designed to endure a lifetime and provide faultless stitch results. The brand’s distinctive dual fabric feeding mechanism, IDT, has earned it a reputation as one of the most powerful on the market today (Integrated Dual Transportation).

Where Are SVP Sewing Machines Made Now?

Nearly all sewing machines are manufactured by SVP Worldwide in China. Other subsidiaries under SVP, Singer and Viking, are also made under SVP Worldwide in China. Their business consists of more than just sewing machines they also sell a few other household appliances like microwave ovens and televisions as well as vacuum cleaners. The headquarters of SVP Worldwide’s worldwide corporate headquarters is based in Nashville, Tennessee, United States but they also have regional headquarters located in Sydney (Australia), Mexico City (Mexico), and Milan (Italy).

Where was the first Pfaff Sewing Machine manufactured?

The first Pfaff sewing machine was manufactured in Kaiserslautern, Germany by its founder Georg Michael Pfaff.

Pfaff sewing machines are moderately priced sewing machines. They’re built with high-quality materials and sophisticated technology to give them great value for money.

Are Bernette Sewing Machines made by PFAFF?

No, Bernette sewing machines are not made by PFAFF. Bernette is the brand of Bernina.

Are Husqvarna and PFAFF the same?

No, Husqvarna and PFAFF are two different brands that come together under SVP Worldwide. The word “V” in SVP stands for Viking which indicates Husqvarna Viking. On the other hand, the company’s worldwide corporate headquarters is in Nashville, Tennessee, in the United States. Regional headquarters for the corporation are located in Italy, Mexico, and Australia.

Are Pfaff Sewing Machines are manufactured in Switzerland?

Is Husqvarna the owner of Pfaff?

How long can a Pfaff Sewing Machine be used?

The sewing community holds Pfaff models in high esteem due to their durability. A contemporary sewing machine has an average life expectancy of more than 30 years. According to Pfaff’s warranty regulations, a Pfaff model should last at least 20 years.

And there you have it! To sum it all up, Pfaff sewing machines are manufactured by SVP Worldwide, which has a sewing machine plant in Shanghai, China. They are available in numerous models for both home and professional use, are durable, and will easily last for many years of service.

Believe it or not, Pfaff Sewing Machines have been around since 1862 and have a presence to this day. The Pfaff Company was originally based in Kaiserslautern, Germany but has since moved its facility to Shanghai China. Industrial Designers created the modern form due to the German/Swiss heritage of sewing machines and as a way to create a machine that was highly engineered yet easy to use for anyone. Pfaff sewing machines are an excellent choice for sewing enthusiasts and professionals alike.

Also, if you have a vintage Pfaff sewing machine, please check the year it was manufactured. You might be able to sell it for a good price because some antique and vintage Pfaff models are rather desirable.

If you have any further queries, please share them in the comments section, we would be happy to hear from you.